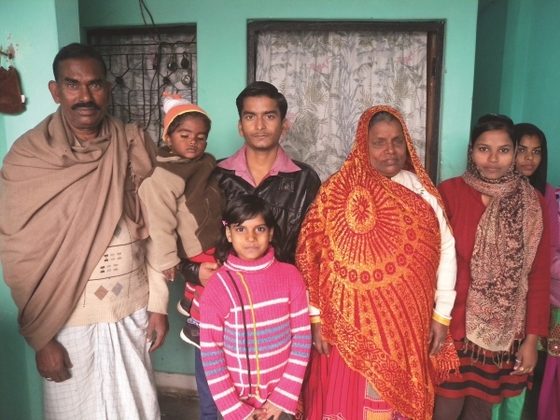 This is Bina with her family. It wasn’t until Bina happened upon a GFA-supported radio broadcast that hope penetrated the sorrowful mother’s dark world.

She Could Not See, but She Could Hear

The sun may have been shining, but that hardly mattered to Bina—her life was always dark.

Her wrinkled, brown hands acted as her eyes. As evening drew near and the daily activities came to a close, Bina’s fingers quickly found a small box with a plastic knob. As she turned the radio’s dial, hoping to find a station she liked, her attentive ears caught an unfamiliar word—Jesus. Intrigued, she paused to listen to the program...a decision that would change her life forever.

Bina was born blind, so she learned to use her hands and ears instead. Because of her handicap, she felt worthless, good for nothing, disposable.

Bina’s older sister had married a man named Sameep, but sadly, after a few years, she became paralyzed. Bina prayed to her gods and goddesses for her sister’s wellbeing, but her sister eventually died. This troubled Bina, as did the other sicknesses her family experienced.

After Bina’s sister’s death, the family arranged for her and Sameep to get married. The two of them had three children and lived together in relative happiness for many years, but Bina couldn’t shake her feelings of confusion about the health of her family.

For her evening entertainment, Bina often turned to radio programs. One day, she heard something that brought comfort to her restless heart, something about a man named Jesus who cared for people and could heal them. She didn’t understand everything, but as the speaker on the GFA-supported radio program closed his message with a prayer, she felt peace. After that prayer, Bina wanted to hear more.

The more Bina listened to the program and prayed along with the speaker, the more God moved in her life. She gradually realized that the days she prayed to Jesus were her happiest and most peaceful days. She even started praying to Jesus for the well-being of her family, and He brought His healing touch to their lives. What’s more, the entire atmosphere of their home became peaceful.

As Bina witnessed the changes Jesus made, she shared the radio program with her husband and other family members. A desire grew in her heart to give Jesus first place in her life. After she and her husband moved to a new city, they met a GFA-supported pastor and started attending church. Although Bina’s physical eyes remain dim, the eyes of her heart have been opened to hear the voice of Jesus through the radio program.

Next: No ‘Other Woman’ Anymore