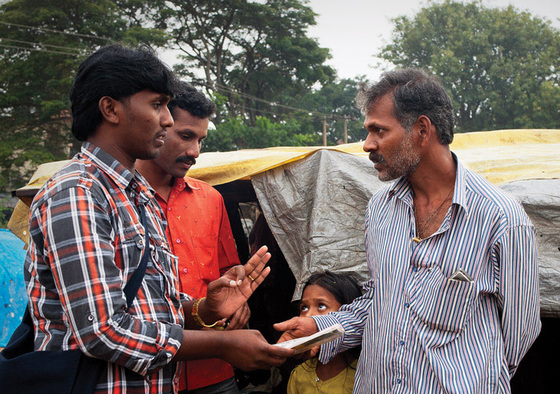 How an Argument Led to Salvation

Emaan had been ready for a good argument when Pastor Kavith showed up. As planned, Emaan began barraging Kavith with questions. But Emaan’s motivations were different than he had originally intended.

When Gospel for Asia-supported pastor Kavith began ministering in Emaan’s village, he faced great opposition. The people of this community adhered to their ancestral faith and viewed Christianity as a dishonorable, “tribal” religion.

“Aren’t you ashamed to forsake your own deity and worship the tribal god?” the elders chastised. “Keep your religion to yourself and stop spreading it here in this village. You are not at all welcome among us.”

Undeterred by their harsh words, Kavith knew God deeply cared for these people and continued sharing Jesus’ love with them. One day, while visiting people’s homes, he met Emaan. Like the other villagers, Emaan ardently worshipped his ancestral deity and thought each community should follow their own religion.

Despite their different beliefs, a friendship blossomed between Kavith and Emaan. As they grew closer, Kavith began to tell Emaan the Good News and give him Christian literature, but Emaan usually just tried changing the subject.

Eventually, Emaan decided he’d had enough. He thought that if he read the booklets Kavith had given him, he could argue with Kavith and shut him up once and for all.

But as Emaan started reading the literature, he began to appreciate the teachings of Christ. His heart started opening to God’s Word, and his mind filled with questions about things in the booklets he didn’t understand. Many times his wife noticed he was lost in contemplation.

Sometime later, Emaan saw Kavith again. He started debating with Kavith—but with a different motivation than he had originally planned. Instead of trying to debunk Kavith’s beliefs, Emaan asked questions to understand what he had read in the booklets and find out if it were true.

From Film to Transformation

In July 2012, Kavith asked a GFA film team to show a film about Jesus in the village and invited Emaan. As Emaan watched the film, he saw the sacrifice Jesus made, and God softened his heart even further.

“I had been hearing the Word of God, but today was the first time I watched this film on the life of Jesus,” he declared after the show. “I had been thinking that Christ was only for tribal people, but now I realize I was so wrong.”

Emaan made a decision to follow Jesus, and since then, he’s been sharing the Good News with his wife and his co-workers. Even though his friends mock him, he continues to pray that they, too, will embrace Christ’s love.

If Pastor Kavith hadn’t had Gospel literature, Emaan may not be walking with Christ today. Because Kavith did give those booklets to Emaan, though, God transformed Emaan’s heart, and this man now lives as a testimony of the power of God’s Word.

Next: The Time Was Now