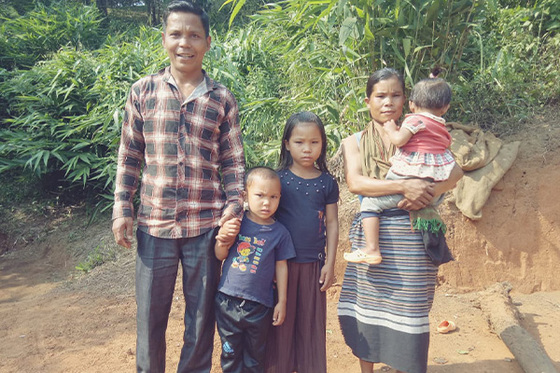 Pastor Sealey and his wife, Bianca, (pictured) have faithfully ministered God’s love in whatever community the Lord has planted them. Currently, they minister to a church of nearly 40 people.

The Fruit of Faithful Ministry

Normally, 32-year-old Reeve and his family attended church services every week. But for two weeks straight, they were absent. The entire family was sick with high fevers and coughs. As Reeve was a farmer, he could not afford a hospital visit for one person, let alone his entire family.

Then, a visitor approached their door: It was their pastor, Sealey. Concerned at their absence, the GFA pastor had come to check on them.

After praying for the family’s recovery, Pastor Sealey then journeyed nearly 10 miles to the nearest town. He brought back enough medicine for the entire family. Within a few days, Reeve and his family, grateful for Pastor Sealey’s help, recovered.

For Pastor Sealey, ministry means more than verbally sharing God’s love with individuals who need it. Ministry involves hours of labor: It is visiting the sick, caring for the discouraged, helping the destitute find ways out of poverty. Those the Lord calls to ministry sacrifice time, money—even their own lives. But the men and women, like Pastor Sealey, who answer the Great Commission know stirring hearts with God’s love is worth the sacrifice.

At first, Pastor Sealey faced difficulties in his ministry. As most villagers had little education, it was tough to communicate God’s love to them. But this hurdle didn’t deter the young missionary.

If words didn’t always get the villagers’ attention, actions did. Pastor Sealey, with spade and machete in hand, headed out with the villagers to the surrounding jungles. As he worked alongside them and showed them the best ways to clear out the tangled vegetation for farming, Pastor Sealy won their respect. Finally, they listened. And what they heard changed their lives.

After four years of fervent ministry, the young pastor had begun three fellowships in three separate villages. Today, those fellowships include nearly 200 people.

The fourth year in Pastor Sealey’s journey marked a major change—he married Bianca, a fellow missionary. Bianca joined Sealey in his ministry, and along with the various ministry roles she took on as a pastor’s wife, Bianca helped the poor children in their community. Whenever she could, Bianca gave the children haircuts, trimmed their nails and helped give them baths. Bianca also read and taught them stories from God’s Word. Throughout their work, Sealey and Bianca served with God’s love.

After spending six years in the same area, change came to Sealey and Bianca. Sealey’s leaders transferred him to another village. But besides the scenery, not much changed. As in their previous areas of service, Sealey and Bianca ministered constantly, spreading God’s love to all. And currently, nearly 40 men, women and children are a part of the church led by Pastor Sealey.

Many national missionaries have similar stories to Pastor Sealey’s and Bianca’s. They give of themselves tirelessly to bring God’s love to families and communities who may never have heard of Christ. No matter how hard their work may be, it is well worth the reward of seeing lives transformed.