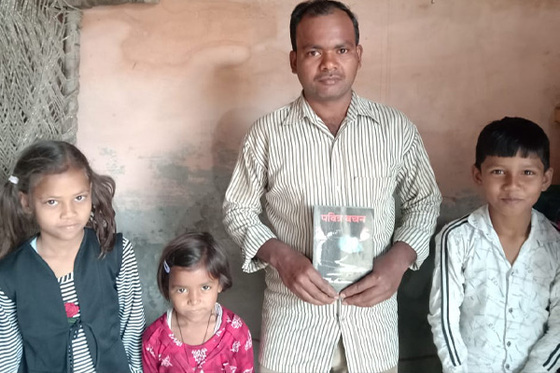 Siro (pictured) almost didn’t take Pastor Rahn’s gift, a New Testament, but when his daughter Pabla read the book to him, God did a miracle.

It was a national holiday, so Siro had the day off from his job as a painter. When a strange man approached his door, he wasn’t yet ready to hear the message of hope the man had to offer. The visitor, GFA pastor Rahn, offered Siro and his family a New Testament and some booklets. He also explained that he was available to pray for anyone in need.

“We are illiterate people,” Siro gruffly responded, “and we do not know how to read and write. You better move [on] from our house.”

“Your daughter can read for you,” Pastor Rahn suggested. “Please just listen. This is … the Word of God, and it can change your life, as well as all the difficulties you are facing.”

Then Pastor Rahn moved on, as Siro had advised him to do. He didn’t know that Siro and his family were facing serious difficulties.

For some time, Siro had been frequently experiencing attacks that seemed to be caused by an evil spirit. Some nights, he would suddenly become restless and then faint. These episodes disturbed the whole family.

The night after Pastor Rahn’s visit, another attack happened. Siro woke up at midnight shouting. His wife began weeping in distress. But Pabla, their seventh-grade daughter, remembered Pastor Rahn’s words. Maybe the Word of God could solve their problems, as he had claimed.

Pabla took the New Testament and began reading aloud. Suddenly, a voice bellowed from her father’s mouth: “Don’t read this book.” But Pabla’s mother told the girl to keep reading.

After a while, a miracle occurred. With one more shout from her father’s lips, the evil spirit apparently fled—Siro was free. He became calm and asked for some water to drink. Then he hugged Pabla.

Pabla read aloud to the family a little more. Then, after so many disturbed nights, they all slept in peace. Siro woke up in the morning with a firm conviction: We slept peacefully after a long time because of this Word of God.

Siro told Pastor Rahn about the miracle. The family began attending worship services at the church led by Pastor Rahn and put their faith in Jesus. Because of the gift of God’s Word, the family found freedom from oppression; now they have a lasting peace in Christ.

Previous: The Fruit of Faithful Ministry

Next: Pray for God’s Mercy upon Myanmar