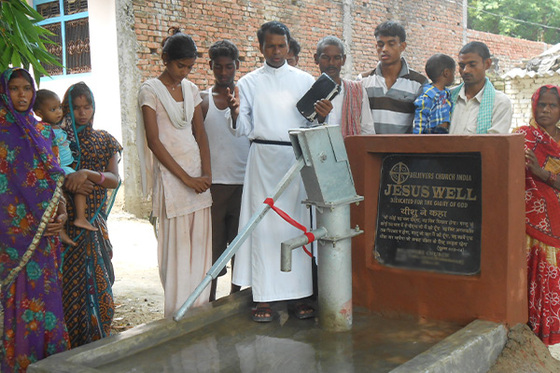 A Dire Need, a Compassionate Response

GFA pastor Macen regularly visited the villages in his surrounding community. With a heart of compassion, he took note of the various needs in those villages and helped meet them as much as he could, offering practical assistance and spiritual support to the people around him.

But there was one dire need that stood out. It made visiting the villages difficult and threatened the residents’ very lives.

Pastor Macen knew eating or drinking anything in these villages carried risk. The people lacked access to clean water and proper sanitation. As a result, disease was rampant.

The need in one particular village pricked Pastor Macen’s heart. The people were good-natured; they got along with one another and welcomed his presence. But their water supply for drinking and other daily use was woefully insufficient. They had to travel a long distance to collect water, and even that water was unclean, causing frequent sickness.

Their plight stirred Pastor Macen’s heart to action. “How would it be if we arrange a water facility?” he asked the people, explaining his desire to help and the process of obtaining a Jesus Well. Perhaps the pastor’s words initially brought shock or unbelief and it took them a moment to fully grasp the implications. Perhaps the news was instantly music to their ears. Regardless, they all rejoiced at the prospect of access to clean water.

Living Water for the Thirsty

A local believer offered a piece of land for the Jesus Well, and it was soon installed. The well, which serves about 200 people a day, filled the entire village with joy and gratitude. They could now fill their vessels with pure water that didn’t carry disease, and they could easily collect it in their own village, without hauling it miles to their homes.

Though the people had previously welcomed Pastor Macen, they were initially hesitant to listen to his message. The church’s response to their critical need, however, demonstrated Christ’s love and drew the people’s hearts to Him. Several families, after tasting of clean water and God’s love, have now put their trust in the One who offers Living Water.