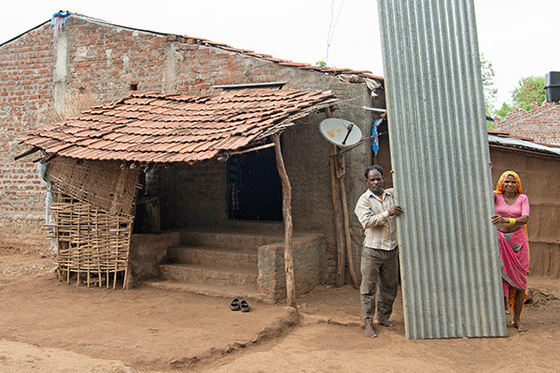 Like the couple pictured, Basti, Haira and their sons lived in the annoyance and danger of a leaky home—until they received the gift of tin sheets.

Drop by drop, water leaked into Basti’s home. Drop by drop, hope had trickled out of his life. A few years before, living in a leaky hut would have seemed unthinkable. But the comfortable life Basti and his family once enjoyed was now unattainable.

A Sudden End to Stability

More than 20 years earlier, Basti and his wife, Haira, had moved from their village to a large city. Basti got a job in a textile factory that paid well. Over time, Basti and Haira had two sons, and they were able to buy their own home.

But challenges began when the couple noticed some peculiarities in their sons’ behavior and thinking. After many doctors’ visits, they learned both boys had autism.

The diagnosis troubled Basti and Haira. They visited temples and asked for healing. They also spent a lot of money on treatments and check-ups, but nothing seemed to help the boys.

Then their stability crumbled to pieces. The textile mill where Basti worked closed down after a strike. After enjoying a steady job for 20 years, Basti had no source of income. The family lived off savings, scraping together enough to continue providing medical care for the two boys. Eventually, Basti and Haira had to sell their house.

When their money ran out, the family moved to Basti’s home village, but he still couldn’t find work. Haira tried to support the family working as a day laborer in the fields—a job that typically pays less than $5 a day.

With their dire financial situation, the only house they could build was a thatched-roof hut made of palm branches. Their roof began to decay after only one year, and water leaked into their house whenever it rained. It seemed there was nothing they could do and no one to help them—until their neighbor took notice.

A Light Shines Through

This neighbor, who was part of the fellowship led by GFA pastor Felo, saw the family’s hardships and wanted to help. He often told them about Jesus.

One day, Basti noticed Pastor Felo visiting his neighbor’s home to pray. Exhausted from their hardships, Basti and Haira decided to see if Jesus answered the pastor’s prayers and went to their neighbor’s home.

Pastor Felo listened to the couple and shared about Jesus. When Basti and Haira heard about His power to transform lives, joy seeped into their hearts, and they began to trust in Jesus.

Pastor Felo continued visiting the family and praying for them. Every time he saw their tiny home with the sagging roof, sorrow filled his heart, and he prayed for God to do a miracle for them. Soon, God allowed him to be part of the answer.

A Token of Hope

The next time GFA organized a gift distribution in the area, Pastor Felo made sure Basti and Haira were included. When the couple was called up to the front, a shiny set of tin sheets stood before them. Tears welled in their eyes as they clasped the gift. Finally, they had a chance for a leak-free home!

Like the couple pictured, Basti, Haira and their sons lived in the annoyance and danger of a leaky home—until they received the gift of tin sheets.

Having a sturdy home, a dream that had previously been unthinkable, became reality. Basti and Haira reconstructed their home with bamboo poles as the walls. On top, they placed the tin sheets as the roof—a roof that would keep them dry.

The family still faces hardships, but they now have a safer place to sleep at night. Basti and Haira thank God for the gift that provided a token of hope and a chance for some stability.

“Now we have no tension,” Basti says. “My wife and children are safe in this new home, even if there is rain or wind. I had gone through a series of struggles. I am still unemployed, but now we have a hope that the Lord is with us, and He will change all our situations for our good.”