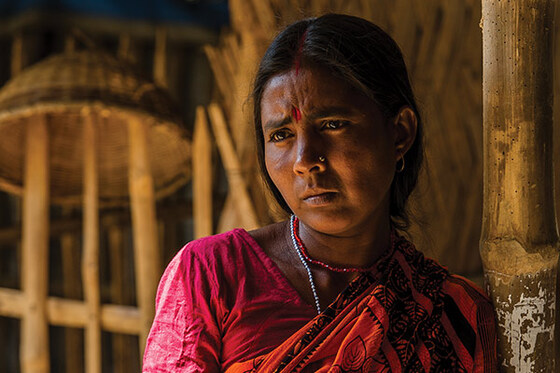 GFA workers seek to minister to people in need of hope, like the woman pictured and like Para.

Adas’s response—or lack thereof—stifled the small, roadside home. Was he willing to change?

GFA pastor Balt had come to the house because Adas’s wife, Para, desperately wanted help. Their marriage was in dire straits. Para had sought Pastor Balt’s counsel, and she was willing to change. Much of the change that needed to happen, however, also depended on Adas’s response. Adas’s silence hung in the air.

An End to Their Fairy Tale

It had been a passionate teenage romance. Para and Adas started seeing each other when Adas worked on a vegetable farm near Paras’ parents’ home. Neither of their parents approved of the relationship; they thought Para and Adas were too young. So at age 19, Para and Adas eloped. Suddenly, they had what they so desperately wanted … or did they?

Soon after marriage, Para realized it was not what she had expected. Adas’s behavior changed. He spent a lot of time away from home engaging in illicit behavior with friends. Arguments erupted between Para and Adas—arguments which led to days of silence. Adas wouldn’t eat the food his wife cooked. Sometimes he left the home and wouldn’t return for days. Even when he was home, the couple didn’t sleep in the same room. Overwhelmed by frustration and disappointment, Para didn’t know what to do.

A Search for Restoration

One day, when Para was walking to the store, she met Pastor Balt. As they chatted, Para was struck by the pastor’s words about a Man named Jesus, who had the power to change lives.

GFA workers seek to minister to people in need of hope, like the woman pictured and like Para.

Para told Pastor Balt the story of her troubled marriage. Could Jesus turn their situation around and give her and her husband a happy life together? Para desperately wanted to know. Pastor Balt prayed for her and assured her that, yes, Jesus could change their lives if they trusted in Him.

Para wanted to pursue this Jesus in hopes that He could transform her husband’s heart and save their marriage. But first, she asked Christ to change her own life and bring peace to her home. She began attending worship services at Pastor Balt’s church, and eventually she told the pastor she wanted to follow Jesus.

Seeing Para’s desire to walk with Christ but knowing the challenges she would face—especially with an unsupportive husband—Pastor Balt visited her home to counsel her and Adas. Pastor Balt spoke to the couple, particularly to Adas. But Para’s husband uttered not a word.

The following Sunday, however, Pastor Balt was shocked when Para—and Adas—walked into the church. Even though Adas had remained silent after their previous conversation, something in his heart changed. The couple asked Pastor Balt and the church to pray for them; they said they wanted to change their lives and walk with Jesus together.

After that day, Para and Adas’s lives turned around. No more fights, no more arguments. Instead, they faithfully went to worship services and studied God’s Word together. Adas continued working in the vegetable farms, and Para received an additional blessing: the chance to enroll in a nurses’ training program. She hoped one day she could touch the lives of patients with the love of Jesus, who had changed her life.

“I am so thankful to our Lord Jesus for giving us peace and joy and taking away all our family problems,” she says. “I had no hope of ever finding love … but He has given us a new life. Thanks be to God.”

Para and Adas would not have experienced this transformation if God hadn’t sent a national worker to pray for them and counsel them. Thank you for equipping national workers like Pastor Balt to help communities and families in need.

Previous: A Second Chance for Success

Next: Snake Charmers’ Chance to Change Their Lives