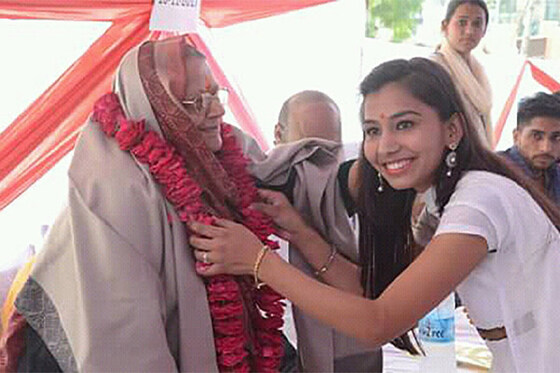 As the daughter of a poor, alcoholic daily wage laborer in Asia, Venita was destined to obtain limited education and repeat the cycle of poverty. Yet here she stood, a college graduate contributing to society as well as to her family’s income.

Venita’s father, Kadan, barely earned enough for his family’s survival, and his drinking problem only depleted the family’s funds. Education for his four children, especially his three daughters, was not a priority. Venita’s community considered education for girls an afterthought. Venita attended school but, hampered by the lack of proper study materials and support, she struggled.

One day, the family met Abiah, who told them of a nearby GFA World Bridge of Hope center that could help Venita. If the academic assistance didn’t appeal to the impoverished family, the other benefits, such as a free daily meal and school supplies, surely did. At the age of 8, Venita entered the program, and her life would never be the same.

With careful guidance from Bridge of Hope staff, Venita soon caught up in her studies, and learned discipline, manners and morals along the way. She also had the opportunity to participate in extracurricular activities, such as drawing, singing and reciting poetry. When she attended a medical camp hosted by the center, Venita received eyeglasses, which allowed her to see clearly the new world now open to her.

With the help of Bridge of Hope, Venita completed 12th grade and went on to college, where she participated in student government and solved various student issues. She earned good grades and completed her bachelor’s degree. Venita broke out of the cycle of poverty; she was destined for greater things.

Once a young girl struggling in her studies, Venita now tutors children—helping them acquire tools necessary to achieve a brighter future—and helps her family financially.

To what does Venita attribute her success? The foundation she received at Bridge of Hope.

Venita is thankful for the Bridge of Hope teachers who impacted her life, and she continues to visit the project center occasionally to seek their advice. Their investment has changed her life and transformed her future.

Thanks to donors like you, Bridge of Hope is helping children like Venita rise above the weight of poverty and find their true destinies, impacting their families and their communities. You are investing in their lives!

Next: Running Out of Options