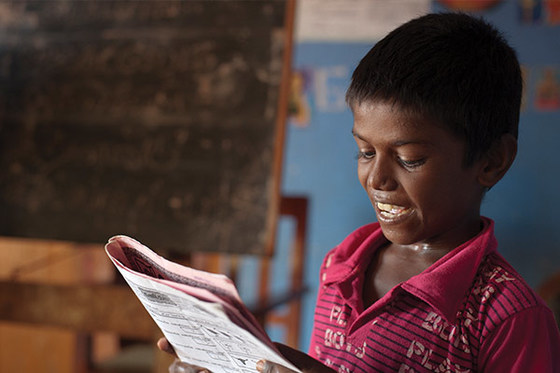 Bridge of Hope is helping thousands of children, like the boy from Sri Lanka pictured here, and like Yunay, to gain confidence and work toward their aspirations.

On Yunay’s first day at the Bridge of Hope center, he felt reluctant to be there with the other children. He dreaded the snickering that dogged him wherever he went. How could he avoid the ridicule and shame he expected to face? If he pressed his lanky, brown body to the wall, would it swallow him up and spit him out somewhere else? Maybe he just wouldn’t return to the center.

When the kids at Yunay’s school found out his dad was in jail, they pummeled him with taunts and verbal jabs that caused Yunay to burn with shame.

Yunay struggled to concentrate at school because he always listened for the next verbal grenade. Eventually, Yunay didn’t see the point of attending school. Why put himself through the torture when he couldn’t succeed socially or academically? Anger fueled by deep sadness overtook Yunay, and he went to school less and less.

At home, life hurled more chaos and difficulty at Yunay, the oldest of three siblings. When his father was released from jail, he did not stop his criminal activities, and he sporadically showed up at home to heap insults on his wife and beat his children. Yunay bore the abuse but threw the pain back at his mother. He treated her with disgust and stubbornly refused to obey her, adding a strained relationship with his mother to his misery.

At this low point in Yunay’s short 13 years of life, help finally appeared.

One day, two Bridge of Hope teachers surveyed Yunay’s neighborhood. They came to Yunay’s house and met his mother, who shared the family’s struggles. Filled with compassion for the troubled boy, the teachers invited Yunay to enroll in Bridge of Hope. Through Bridge of Hope, they told him, he could attend extra classes to catch up at school, learn life skills and eat a nutritious meal each day. Yunay’s mother brightened at this opportunity, knowing Yunay’s younger siblings were sure to follow in their brother’s footsteps—for better or worse.

At first Yunay did not want to go to Bridge of Hope, convinced the other kids would reject him when they found out about his dad. He just couldn’t face that again. But the teachers visited Yunay again and encouraged him to try it.

So he did. A month went by and nothing bad happened. Yunay’s attendance became more frequent, and he rediscovered school activities that used to bring him joy. Yunay began bringing home study material and received help from the Bridge of Hope teachers. As he succeeded, his heart turned back toward school; he longed to improve himself.

Slowly, the security and acceptance Yunay experienced at the Bridge of Hope center gave him a firm foundation. He found peace through prayer and asked God to reconcile his broken family. Happiness grew in Yunay, along with a hope for a future far different from the legacy handed to him by his father.

Yunay, now back at school, still occasionally hears ridicule. However, he is confident of his worth in God’s eyes, and this has become a shield of protection for the young boy. With the stable and loving community at the Bridge of Hope center, Yunay can now launch into the future he knows God has for him.

“I am happy that I could join the Bridge of Hope center because it has changed my life,” Yunay says. “Even though my father set no good example for me [and did not] discipline me, I have learned good values from the center and can set an example for my younger brother and sister. I thank the Lord Jesus for the peace He has given me and for loving me.”