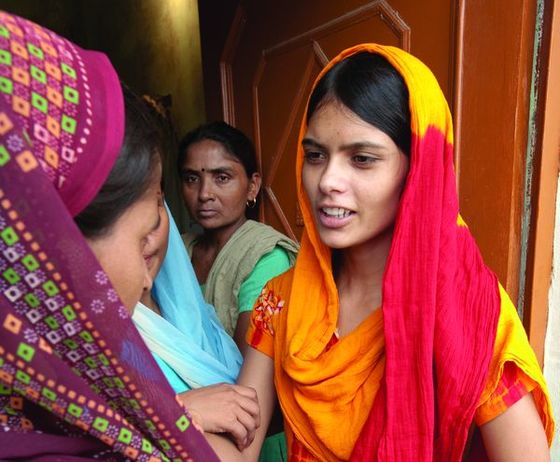 GFA workers devote much of their time to praying for and sharing the message of Christ’s grace with people, especially women in their communities who face challenges they can’t overcome alone.

Sevita pressed the back of her hand to her daughter’s damp, burning forehead. The anxious mother hesitated for a moment before she moved to get help.

One day, Dhitha, Sevita’s daughter, collapsed. Then, before three months had passed, she collapsed again.

After Dhitha’s first epileptic attack, Sevita immediately sought medical attention and received medication for her daughter, but the seizures continued.

As Sevita looked for ways to help, she thought about her neighbor, who was friends with two GFA workers. Sevita had met the women many times but had never condescended to give them attention. But the day Dhitha lay ravaged by fever, Sevita laid down her objections and begged her neighbor to call the women to come pray for her daughter.

Sevita opened the door to GFA workers Kuntala and Rabia as soon as they arrived. The women rushed to the child and asked Jesus to heal the girl. They rubbed oil on Dhitha’s head and gave her a glass of water to drink. Kuntala and Rabia prayed over every action, asking Jesus to have mercy on this family. Dhitha’s fever lessened before the women left, and after three days, her fever vanished. Relief flooded over Sevita.

Grateful for the women's’ help in her time of crisis, Sevita invited Kuntala and Rabia to her home every week for prayer.

As time went on, Sevita noticed Dhitha had not had a seizure since before her fever. Jesus had cured not only Dhitha’s fever, but also her epilepsy! Amazed at the miraculous healing, Sevita gave her heart to Jesus, knowing He saved her child. Now she casts all her burdens onto the Lord, who promised to carry them for her.

Previous: A Gift from Someone They Almost Abandoned

Next: Friendship and a Piglet Comfort Widow