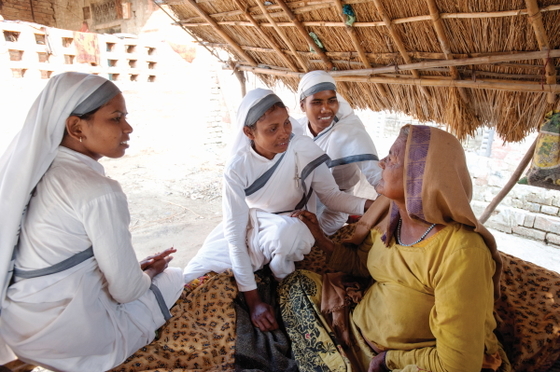 GFA Sisters of Compassion often befriend and care for widows who have experienced tragedy and rejection.

Rani’s life had withered under the shadow of pain and hardship, but one day light penetrated that shadow when three women simply noticed Rani and the sadness lining her face—a sadness that had built up over many years.

From Loneliness to Friendship

Rani received little education growing up, so she had limited options in life. She married, but her marriage proved a painful one as her husband fell prey to alcohol. While enduring her husband’s addiction, Rani suffered an excruciating case of hemorrhoids that sapped her health and strength, although she took medication. Doctors said she needed surgery, but she couldn’t afford it. Then Rani’s husband died. Suddenly, Rani was alone in her pain. She struggled to earn a living by washing clothes and dishes for people.

One day, Rani met three Sisters of Compassion. These GFA workers had received special training to share God’s love with the marginalized and neglected—including people suffering from leprosy, widows and people in poverty—and they were committed to serving Rani’s community.

When the Sisters of Compassion met Rani, they noticed she looked weak and sad. They prayed for her and shared words of comfort about God’s love. They began visiting Rani frequently, and a friendship grew. As Rani heard her new friends talk about Jesus, she felt a fresh sense of peace.

One day, Rani told the Sisters about her physical pain, and they prayed for her. The Sisters also encouraged Rani to believe Jesus could heal her.

A seed of faith germinated in Rani’s heart as the Sisters continued praying for her, and Rani gradually improved. When Rani went for a medical check-up, the doctor told her she no longer had hemorrhoids!

Rani chose to follow the God who healed her. She grew closer to Jesus, faithfully worshipped with the local church each Sunday, and joined in prayer meetings. The Sisters of Compassion, who once noticed Rani’s sadness, continued to visit their friend, whose face now shone with peace and joy.

Next: Cares of the World Choke Boy’s Heart