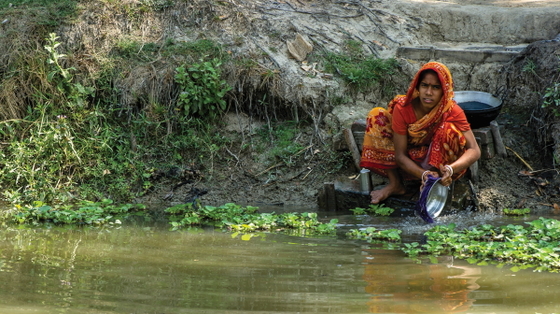 Many people in Asia, like this woman, must use unsafe water from ponds or old wells, like those in Pastor Jabez’s village.

People in Pastor Jabez’s village were finding the life-changing love of Christ, and the congregation was growing. Along with their newfound joy, however, a new struggle arose—a struggle to provide for their basic needs.

No Water for Christians

Seven wells dotted the rural village landscape, but the water in these wells was not fit for drinking. During the rainy season, that water was even worse: muddy and filled with dangerous bacteria. As the villagers drank the contaminated liquid, diseases such as typhoid and malaria caused much suffering.

For more than two years, Pastor Jabez and his congregation gathered weekly to pray for a Jesus Well to be installed in their village. Then, through the generosity of God’s people, their prayers were answered.

Their new Jesus Well provided cleaner water than any of the other wells and Pastor Jabez’s congregation did not bar anyone from drawing water. Everyone—even those who had despised them—were free to come and draw pure, fresh water. The other villagers changed their minds about Christianity when the believers welcomed them to the well with open arms.

Jesus Wells like the one installed in Pastor Jabez’s village improve the health of entire communities and enable them to hear of God’s love. The life-giving water provided through Jesus Well’s offers to meet both spiritual and physical needs. Thank you for helping make stories like these possible!

Next: Protecting Health by Giving Toilets