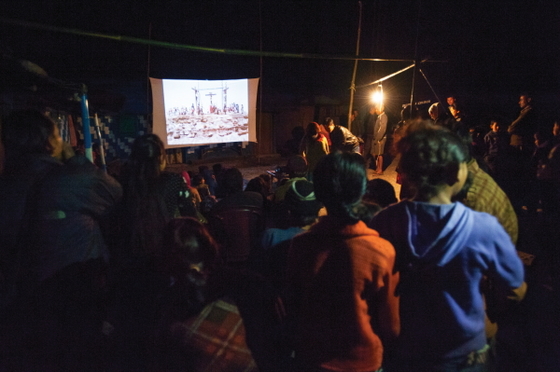 The rare excitement of watching a film—in this case, about the life of Jesus—gathers large crowds. Even those who would not be open to hearing about Jesus are often eager to join the movie audience.

After the Film He Didn’t Want to See

For the first time in 25 years, a village gathered to see life-changing scenes scroll before their eyes. Afterward, the projector screen went blank, but the story of Jesus story remained stamped on the hearts of the audience—a story most could not have read, as 90 percent of the villagers were illiterate. The GFA mobile team that had organized the show started packing up the film equipment. Suddenly, a frightened woman suddenly rushed over to them.

From Anger to Curiosity

The mobile team had encountered this woman, Lekha, earlier in the day, as they were walking through the village to invite people to the film.

When they came to Lekha’s home, she and her kids said they wanted to come to the film. But Lekha’s husband, Dhir, emerged from his room with his face set in an angry grimace. He stated that his family wouldn’t watch the film and told the missionaries to leave.

Despite Dhir’s anger, Lekha and the children went to the film show. An hour later, Dhir showed up to bring them back home, but when he saw the large crowd, he decided to stay. He left with images of Christ’s crucifixion and resurrection fresh in his mind.

When Dhir and his family got home, Lekha realized something was wrong. Dhir suddenly began acting violent and breaking things. Lekha rushed to find the mobile team and asked them to come pray.

As the mobile team and local pastor approached the gate of Lekha’s home, Dhir immediately calmed down. Dhir didn’t understand what had happened to him, but the believers knew God had intervened. They shared with Dhir about the power of Christ, prayed for him and invited the family to visit the local church.

The rare excitement of watching a film—in this case, about the life of Jesus—gathers large crowds. Even those who would not be open to hearing about Jesus are often eager to join the movie audience.

The following Sunday, Dhir went to church. He and his family began attending worship services regularly, and after some time, Dhir decided to follow Jesus.

God used a mobile team to give Dhir’s village the opportunity to learn about His Son. Now, more people are getting to hear good news as Dhir tells others about Jesus, the God who delivered him.

Previous: A Future After the Tsunami

Next: A New Kind of Rebellion