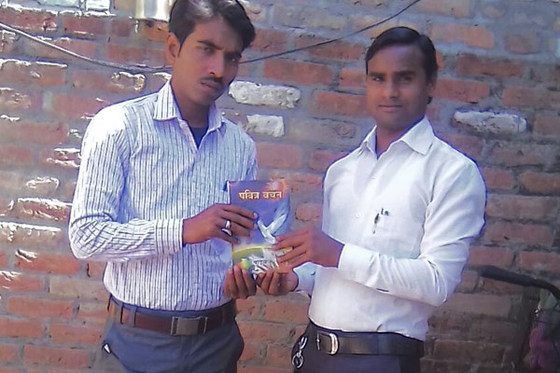 Filling an Empty Heart with Peace

Faithful and hardworking were two words that could be used to describe Vedansh. Married with two children, Vedansh did all he could to provide for his family. Yet there was something missing from Vedansh’s life.

Vedansh worked as a daily laborer to feed his family—yet despite his efforts and his faithfulness to his beliefs, Vedansh was unhappy. It was as if there were a void dwelling in his heart. Vedansh’s outside appearance was one of happiness, but the turmoil within him grew and grew.

An Encounter with God’s Love

One day, as Vedansh was returning home from work, he happened to meet GFA-supported pastor Vikranta. The two struck up a conversation, and Pastor Vikranta shared of God’s love. As they continued talking, Vedansh explained his struggles and the discontentment roiling in his heart. He detailed the many rites he performed in hopes peace would come.

The pastor listened and offered to pray for Vedansh.

“God is the Peace-giver, and He gives peace which is perennial,” the pastor encouraged. Before he left, Pastor Vikranta offered the troubled man a New Testament and suggested he read the Gospel of John.

The very next day, Vedansh called Pastor Vikranta and said he felt peace he had never felt before. Pastor Vikranta rejoiced with Vedansh and invited him to attend the upcoming worship services at the local church.

Over the next month and a half, Vedansh read the New Testament. One verse stood out to him in particular: “For God so loved the world that He gave His only begotten Son, that whoever believes in Him should not perish but have everlasting life.”

John 3:16 powerfully touched Vedansh, filling his heart immediately with peace. Over the next months, Vedansh and his entire family attended services, learning more about God and His never-ending love. Vedansh also finished reading the New Testament. And as he did, the peace he felt stayed permanently.

“Once, I lived without peace,” Vedansh says. “But when I found the living God and read His Word, my heart was filled with peace.”

Previous: A Gift Out of the Wreckage

Next: Giving Them What He Never Had