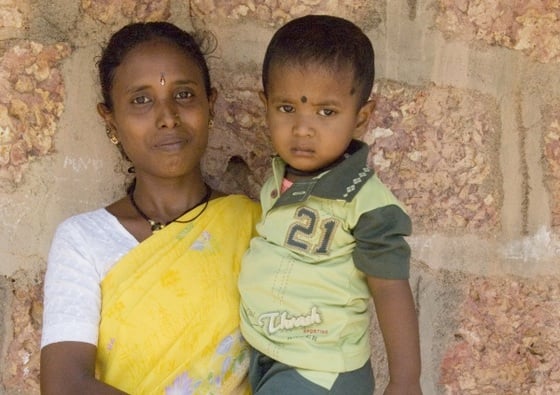 Just as Aapti and Sahasya longed for a child, this woman and her husband were unable to conceive—until a GFA-supported pastor prayed for them. She now has a son and another child on the way.

What the Doctors Couldn’t Do

“You try to please your god, but he is angry with you,” Sahasya’s community mocked.

These words cut deep into Sahasya’s heart. He had been trying all he could with his meager income to bring deliverance and healing for his wife, Aapti. But his gods seemed to be upset with him, and his neighbors mocked him as he searched for relief. He and his bride had sold everything they owned, sought doctors and medical treatments and asked advice from witch doctors; they had even travelled to a neighboring country in search of healing—but nothing worked.

Sahasya and Aapti’s life was not always filled with worry and trouble. The young couple got married at young ages, according to the custom of their culture, and even though they lived in poverty, they were happy. However, they longed for a child of their own, but as years passed by, no baby came.

Life seemed peaceful for Sahasya and Aapti despite their yearning—until demonic forces began to work against Aapti. For five long years, Aapti suffered with an unknown illness, and eventually she was unable to move or even eat.

At Just the Right Moment

It was in this critical state that God sent GFA-supported pastor Jaitra to visit the discouraged couple. Sahasya quickly shared with the pastor about all their struggles.

Pastor Jaitra listened and encouraged the couple with truth found in God’s Word, telling them, “In Jesus everything is possible.”

After hearing what the pastor said, Aapti requested that he pray for her deliverance. “I want to believe and trust in Him,” she said.

Pastor Jaitra prayed for her and invited the young couple to church that week.

Sahasya and Aapti entered the church as many believers filled the building. They were amazed as they watched the believers around them worshiping Jesus with such love. That very day, the couple stood up and expressed their desire to live for Jesus and receive the love and healing He brings.

Pastor Jaitra and his congregation prayed for Aapti daily, and one month later, she was completely healed from her illness. As the couple continued to trust in Jesus, they soon received a gift they had long awaited: a baby!

Thank you for being part of lives like Sahasya’s and Aapti’s. Because of your prayers, God is meeting precious ones, just like this couple, right in their hour of need.

Previous: From Contention to Peace

Next: Short Stories about the Impact of Christmas Gifts