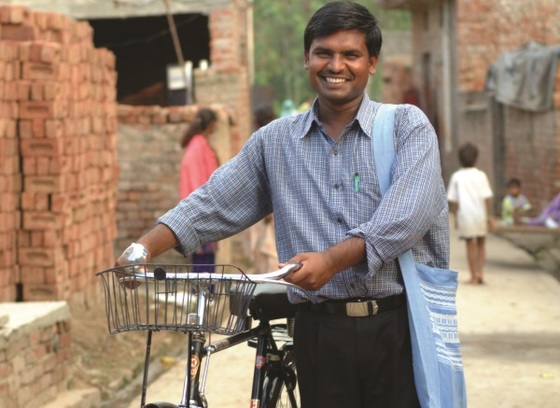 The bicycle this GFA-supported pastor received empowers him to bless more lives every single day. When pastors have bicycles, they can respond quicker to requests for prayer. It also means they won’t tire as easily as they would by walking.

GFA-supported pastor Bhupad had a long way to go. He wanted to meet the people in his village, and that meant walking. He wanted to pray with them and encourage the believers he knew, and that meant walking. A few miles here and there really added up, and even for a healthy 34-year-old father of three, all that walking wasn’t easy—and it took time.

On rare occasions, Pastor Bhupad would hire transportation if the distances were too far to travel on foot, but that always cost more, so most of the time, he walked.

Still, Pastor Bhupad faithfully served others and ministered to everyone he could. Then, in August 2014, he received a bicycle through the generosity of Christians around the world—people like you.

Bike Blesses Pastor so He Can Bless Others

With his new bicycle, Pastor Bhupad visits even more people without using up so much time or getting so worn out by all the walking. He is even able to conduct a regular prayer meeting with the believers in a village that is more than 18 miles away! To walk there and back would have taken almost his entire day, but now he is able to cut his travel time significantly and have more time to bless those in need.

Not only that, the bicycle has also enabled him to travel more at night, when transportation isn’t available, so he can visit families when they call him for prayer. And with his bicycle, Pastor Bhupad can bring his wife along for ministry, so the two of them, together, are more effectively bringing hope to those they meet.

In one place, Pastor Bhupad and his wife started hosting a Sunday school for local kids. Among those youngsters were the children of a poor laborer named Nishat, whom you can read about in the next story.

Previous: Short Stories about the Impact of Christmas Gifts