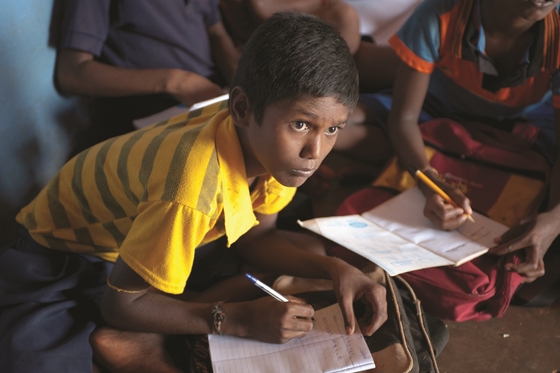 Through the personal attention and love they receive in Bridge of Hope, children like Ritesh (not pictured) find the inspiration and help they need to leave behind destructive habits and pursue their full potential.

From Stealing to Star Student

Ritesh greedily eyed his friend’s belongings. He waited until his friend wasn’t looking, and then stealthily reached out his hand to snatch and hide the desired item. He thought he’d get away with it, as he had many times before in his life, but he was wrong.

The kind yet disapproving eyes of the Bridge of Hope worker watched him. This was the second time Ritesh was caught stealing from his friends at the center. His teachers counselled him, but Ritesh still couldn’t understand why stealing was wrong. The workers at the GFA-supported Bridge of Hope center weren’t about to give up on him.

The thick stench of recently chewed tobacco had often leaked from the 12-year-old’s mouth as he entered the Bridge of Hope center in the early days of his enrollment. Ritesh hadn’t been attending for very long before the teachers and social workers at the center recognized many of the young boy’s struggles. That’s why they took it upon themselves to give him extra attention, encouragement and counselling, giving him the love he hadn’t known growing up.

Ritesh had lost his mother when he was small. His father later abandoned him, leaving him in the care of his grandmother. Because of his family’s extreme poverty, Ritesh was put to work in a hotel. Devoid of the love and encouragement he needed, Ritesh developed destructive patterns of life—patterns that were only changed through Bridge of Hope.

Through many months of care and counselling, Ritesh found a fresh start. First he stopped stealing from the other children. Then he stopped chewing tobacco. The changes in his life brought much delight to his relatives and to all his friends at the center. What’s more, over the years, Ritesh studied diligently and turned out to be one of the best students in his center!

Through the consistent love of the Bridge of Hope staff, this once-troubled child found a bright future.

All this has been made possible through the prayers and donations of people like you. Thank you!

Previous: From Suicidal to a Smile

Next: Short Stories About Jesus Wells