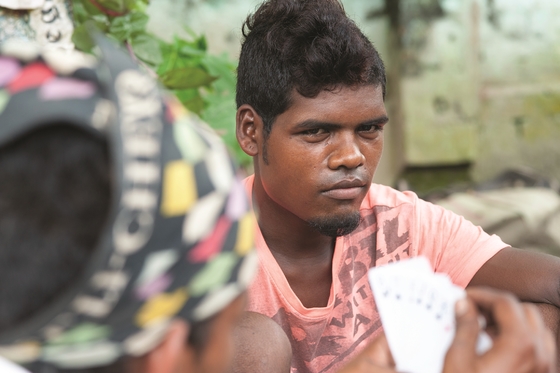 Without steady work or good influences in their lives, many youths, like Garjan (not pictured), become entrenched in immoral and destructive habits with no hope of escape.

It was Garjan’s big day. He looked nice, handsome even, in his wedding attire. By all appearances, he seemed like a young man ready to start a new life with his bride.

His parents, as they had often done for their only son, prayed and offered sacrifices to their gods. All their hopes hung on this marriage. They knew their son was a rebel, an alcoholic and worse. No matter how they tried to correct and change him, he only went deeper into a selfish squalor of immorality.

They arranged the marriage as a final effort to fix him.

Sneaking into a Prayer Service

Not long into Garjan’s marriage, his wife delivered a baby boy. But afterward, she developed a problem of persistent bleeding. The doctors gave her medicine, but Garjan didn’t care for his wife enough to help her with the treatments she needed. Her problem persisted, and so did Garjan’s immorality.

Then one day, Garjan decided to peek in on a prayer service led by a GFA-supported pastor he knew, Pastor Philemon.

Garjan had met with Pastor Philemon many times over the years. The pastor had prayed for him and encouraged him to mend his ways, but Garjan had never wanted to listen. But that day, as Garjan heard the sounds of prayer and worship, God tugged on his heart, and he sat down among the believers.

In the following weeks and months, he came back again and again, even bringing his wife.

The Transformation They Always Wanted

As Garjan and his wife attended the services, they heard about the relentless love of Jesus from Pastor Philemon. He continued to pray for them, and God heard his prayers.

Garjan left his bad habits behind one by one, and God healed his wife of her bleeding.

Through Pastor Philemon and God’s Word, Jesus gently and patiently spoke to their hearts about His grace, and they gratefully and lovingly responded.

Garjan’s parents and in-laws were initially upset that he wanted to follow Christ, but after witnessing the transformation God had wrought in his life, their only response now is gratitude.

Today, Garjan and his wife are preparing for the great Marriage Supper of the Lamb.

Next: A Crowd of Christians