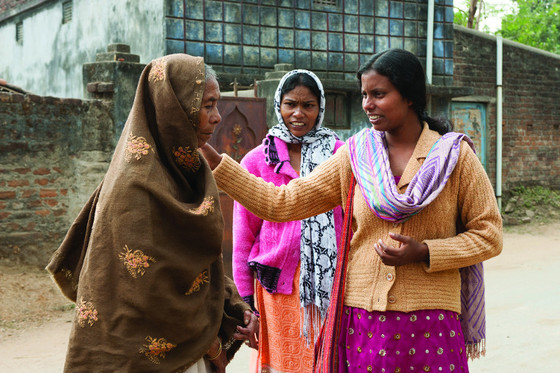 In many Asian cultures, it is considered shameful for a woman to talk to a man whom she is not related to, but a woman can visit with another woman in her home without anyone being called “indecent.” GFA-supported women missionaries are able to minister to women in need and help carry their heavy emotional and spiritual burdens by pointing them to the source of hope: Jesus. Your prayers play a vital part in strengthening these women for the tasks God has given them. We hope you enjoy these short stories.

Fourteen-year-old Naija had heard the name of Jesus, but she didn’t understand who He was; she thought He was just a God for the poor. Naija, along with most people in her family and community, worshiped other gods. That’s why she was confused when she saw people from her own community worshiping Jesus instead.

She wanted to ask someone about Jesus, but she didn’t know whom to talk to. There was no one her age or any one she was familiar with to give her answers.

So Naija was thrilled to meet two GFA-supported women missionaries who answered her questions and explained Christ’s undying love for her. Because of the love of Christ she saw in these two women, Naija now believes in the mercy of the Living God and has the desire to see her family also sitting at the feet of Jesus.

The first seizure struck sometime after Keva’s wedding day, but more came. They grew more frequent five months into her first pregnancy, and neither medication nor doctors’ instruction did anything to improve her condition. Then Keva met a GFA-supported Women’s Fellowship group, led by a woman named Tapti.

These women conducted a special time of fasting within the local church body, specifically asking God to heal Keva from epilepsy. They visited the young woman regularly to encourage her from the Word of God, and Keva and her husband began to trust in and pray to Jesus.

And God answered their prayers! Keva delivered a healthy baby girl, her body is completely restored, and so is her heart, thanks to the healing love of Jesus and a few women who ministered to her needs.

Jasu could tell the GFA-supported women missionaries, Riya and Deborah, were different. For two years, she watched their character and was deeply impacted by the loving way they treated the people around them. They spoke often of God’s love when they visited, and sometimes Jasu attended the local worship services.

One day, Jasu told Riya and Deborah how they had encouraged her so much through the years and impacted her life. She told them how their concern and regular visits lifted her when she felt discouraged. They’d helped her know how a woman should be kind and caring toward her family, and they had helped her draw closer to God and seek His blessings for her family. Today, Jasu is sharing in the same love Riya and Deborah first shared with her.

In a matter of months, Sinjini spent all of her money on cancer treatments—there was nothing left. She, her husband and four children didn’t know what to do until they met a GFA-supported woman missionary named Hinda.

When Hinda shared with them from the Bible about the miracles Jesus performed, the family began to hope Sinjini might be healed.

As Hinda visited them, encouraging them with the Word of God and praying fervently for their situation, the Lord healed Sinjini completely! Witnessing this miracle opened their eyes to God’s love, power and grace. Before long, the whole family came to know the Lord personally.

Old Life Off, New Life On

Every morning, Aadita went to temples to offer sacrifices to her gods so they would keep her in good health. But she always found herself sick in bed. When not even the sacrifices of a local religious authority could bring healing to her body, Aadita gave up on the deities she had worshiped for so long.

Then she met a GFA-supported woman missionary named Induja. Filled with Christ’s love for the sick woman, Induja encouraged Aadita often and prayed for her even more. Aadita heard about Jesus, the God who died to rescue people and give them life. When the Lord healed Aadita a few days later, she and her family couldn’t help but love the One who gave her life anew.

Previous: Sewing Her Sister Through College

Next: Abandoned Mother Blessed by a Toilet