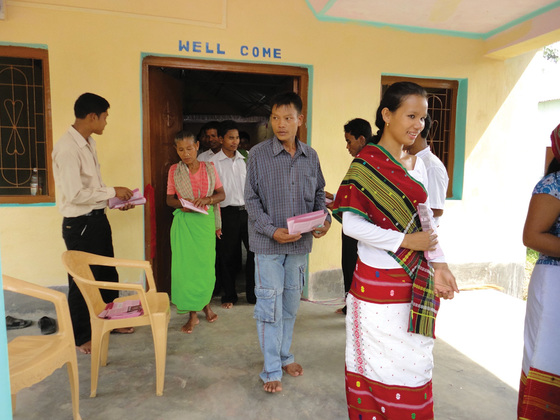 New church buildings are inaugurated every year in South Asia through the prayers, support and generous donations of men and women like you. In this issue of Harvest, we want to share with you the stories behind five of these church buildings. We hope these snapshots give you a better understanding of all the Lord is doing and all you are part of. Thank you for your passion to see more people understand the great love of the Saviour.

When the Storm Came Through

The believers gathered in Danvir’s home—two families and their pastor. But as they worshipped God every week and told others about His goodness, more people came and crowded into the house. After a year, they built a temporary church building out of bamboo, praying all the while for a permanent one.

As they prayed, God answered through His servants around the world by providing the resources for these believers to build a church—and none too soon: Six months before the new building was complete, a storm destroyed their temporary one.

God brought a new church building just in time for our brothers and sisters in Christ.

Kallol, a farmer in South Asia, didn’t think it was possible for a beautiful building to be constructed in his village.

A Gospel for Asia-supported pastor had served in Kallol’s village for 12 years, ministering to the people in need. At first the congregation met in a small, rented home, but after seven years it had become crowded. They purchased a piece of land, but then they encountered some difficulties, which delayed the building. Five more years passed before Kallol witnessed the church completed.

“Thank God for the sponsors who have helped us to build this building for {% trans worshiping" %} the Lord,” Kallol said.

A Place for the Children

Many parents want their children to learn more about Jesus at Sunday school, and many children are eager to invite their friends with them, but when a growing congregation meets in a believer’s modest home, there often isn’t enough room for such lessons.

For seven years, that was the situation Gospel for Asia-supported church Vinil Cho and his congregation faced, that is, until they had a church building of their own.

"Now the children are very happy to come to church," Pastor Vinil shared.

When a congregation receives a church building, everyone is blessed—including the children.

At first, no one in town knew about Jesus, and no one wanted to. But then Sahas’ family came to understand His grace, and soon, two more families joined Sahas in his home for Sunday worship. Over time, more people came to know Jesus, but not everyone was willing to crowd into Sahas’ house. To solve the problem, the congregation built a shelter from mud, bamboo, tin and straw. They prayed for a permanent church building—especially after the shelter mysteriously burned down.

Praise God, today, almost 20 years after a Gospel for Asia-supported church first came to Sahas’ village, this growing congregation has a permanent place to worship the Lord.

The believers in Gospel for Asia-supported pastor Taranga’s congregation loved the Lord very much—He filled their hearts with joy, peace and purpose. But that didn’t make the weeks and months of monsoon season under the leaky roof of a believer’s home pass by any faster, nor did it solve the problem of overheating in the summer. And when the roof would blow off in a strong wind, it needed to be repaired again and again.

So the believers prayed for more than six years, asking God to bless them with a permanent church building. Now 71 believers worship the Lord inside their own building—thanks in part to someone like you.

Next: A True Friend at VBS