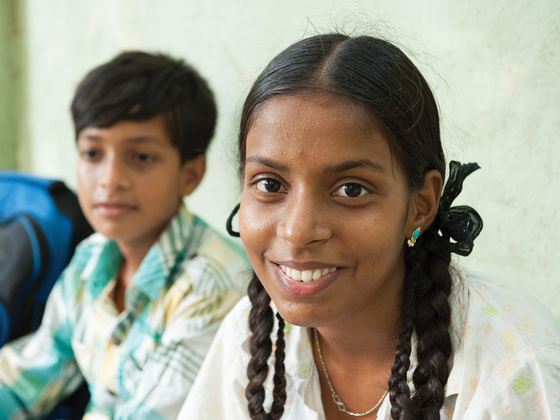 Many students, like Adya, are rescued from difficult situations when they are enrolled in Bridge of Hope.

Adya lost her father when she was a small child. Her mother, a Christian in name only, remarried and had two more children, only to be abandoned by her new husband shortly thereafter. Though Adya’s mother labored from early morning to late night every day, she never earned quite enough to provide for the family. Adya and her siblings often went hungry.

Adya’s mother managed to send her to school from time to time, but Adya’s younger sister, Lalana, and brother, Gayan, spent most of their lives roaming the slums, collecting trash to recycle. That is, until they began attending a Gospel for Asia Bridge of Hope center near their home.

Tarli, a social worker at Adya’s Bridge of Hope center, remembers when young Adya first joined seven years before. The girl, then 8 years old, was scrawny and unclean. She and her siblings didn’t know how to bathe or comb their hair; they didn’t have enough clothing to cover their bodies; they hardly knew how to carry on a conversation.

The tutors and social workers patiently worked with Adya, Lalana and Gayan. The children didn’t know how to read or write, so the Bridge of Hope tutors helped each one individually, guiding their hands to help the children form letters. The centerprovided a daily meal, hygiene lessons, clothing and abundant doses of love. Under this care, it didn’t take long for the children to blossom.

“The life of Adya entirely transformed after she joined the Bridge of Hope center,” Tarli reflects. “She looks beautiful now and has become an energetic student in our center.”

Rather than scavenging for trash, Lalana and Gayan enjoy studying, and 15-year-old Adya has become one of the best students in her school. Her teachers and tutors are proud of her accomplishments, and her mother, after witnessing the transformation in her children’s lives, has come to understand that the Christ she once knew in name only is a Living Savior who still changes lives today. The whole family has decided to embrace His love after experiencing it at the Bridge of Hope center.

Thank you so much for standing with us to make stories like this possible. May the Lord bless you.

Previous: A True Friend at VBS