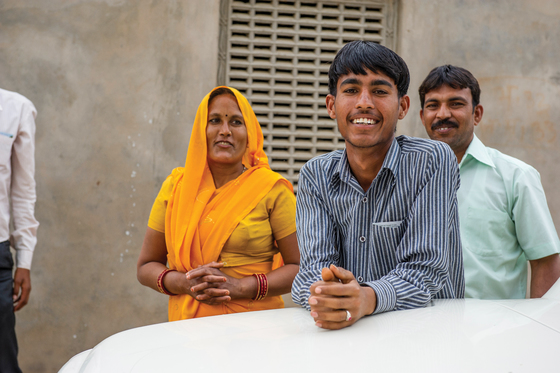 Satwik felt someone grab his arms and pull him away from the fight. It wasn’t the first time the authorities had arrested him, and it wouldn’t be the last. The drunken teenager struggled against the people who restrained him, but he was too drugged to defend himself.

Satwik had tried drugs for the first time when he was 14. Soon he was smoking, drinking and hanging out with the wrong crowd. Enslaved to his addictions, his health rapidly declined and his life began to fall apart.

He and his friends often terrorized the public without cause. Yet no matter how many times he was arrested or how his parents tried to intervene, Satwik didn’t care to change. When he started regularly failing classes, he dropped out of school and left home, roaming back and forth with no place of his own.

Stuck in His Ways

“Brother,” Pankaj said, “[Jesus] is ready to give you a new hope and a new life right now.”

“I have no hope,” Satwik mourned. “I want to live as I am living now. I have no one and no one loves me; everyone hates me.”

Sometime later, Pastor Pankaj visited with Satwik again. He prayed for the young man and encouraged him from the Word. This time, Satwik’s reaction was different.

That day, Christ’s love changed Satwik’s life completely. The boy started getting good grades in school again and began attending worship services at a local church. On top of that, the Lord put a special burden on the young man’s heart: Now Satwik tells all his old friends about the God who can give them hope and save them from their addictions, as He did for him.

Thank you for partnering with us to bring the Good News of Jesus Christ to the people of South Asia. Whether through prayer or finances, you are an encouragement and a blessing to our brothers and sisters on the field. You are enabling them to tell people like Satwik about Christ’s redemption! Thank you!

Next: A Miracle Quenched His Fiery Tongue