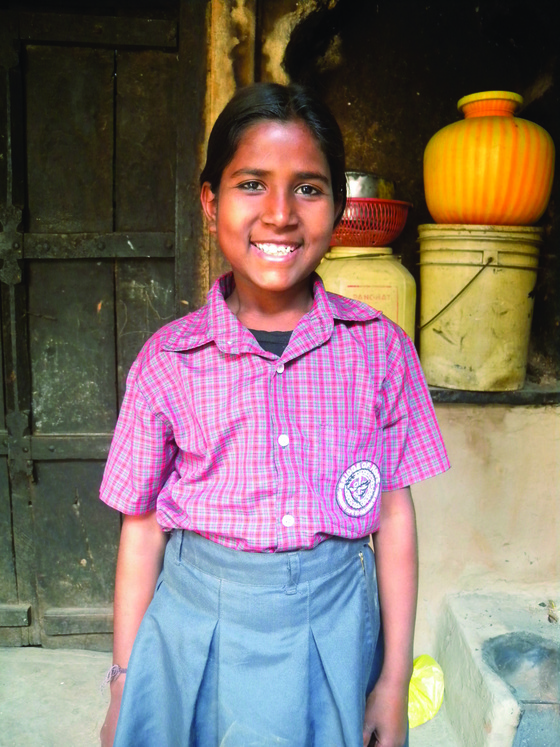 When Mada was only 6 months old, her mother left the family for another man, never to be seen or heard from again. Mada’s father became deeply depressed by his wife’s sudden departure and tried to drink his problems away. He later died of tuberculosis, leaving his 5-year-old daughter in the care of her grandmother, Jana.

Her Burdens to Carry

Mada’s life didn’t get much better after that. Her grandmother often went out to find work, while Mada stayed behind to keep house. The little girl started at 5:30 a.m., cleaning, cooking and doing other chores. She didn’t go to school—she didn’t even know what school was. She had no friends where she and her grandmother lived, and she thought she would never have a normal life.

One day, some staff from a Gospel for Asia-supported Bridge of Hope centre found little Mada in the streets. The girl’s hair was grubby and tangled, and her clothes were filthy. They talked with Jana about enrolling her granddaughter in the Bridge of Hope program, and the woman readily agreed.

At Bridge of Hope, Mada received food, clothing and an introduction to quality education. The love and compassion of the staff members created a desire in the young girl’s heart to study well and learn like other children her age.

Now Mada is 12 years old and has made new friends at school. She likes to study mathematics and enjoys participating in theatrical skits and dance opportunities the Bridge of Hope program offers.

“I like Bridge of Hope very much,” the young student says. “I am thankful to all the staff and those who help me. I want to become a teacher.”

Thank you for sharing the love of Christ with people like Mada. Today, this young girl has reasons to smile.