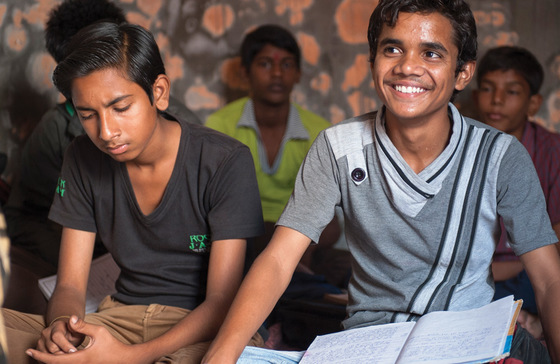 A Time to Mourn, a Time to Dance

People sat transfixed together in front of the young man whose feet danced so brilliantly in time with the music of the guitar-like sitar. Only a few years earlier, Natraj could not have dreamed he would one day perform as a classical dancer in competitions across the country.

Growing up, Natraj and his little sister, Eila, lived in a thatched house in the middle of their village. Their father, Romir, worked as a daily wage labourer in a nearby town, but rather than care for his family, he spent the small amount of money he earned each day to fuel his addictive habits: drinking and gambling. Whenever his wife, Parmita, approached Romir about his behaviour, he would rebuke her in anger and abuse her. Life was a daily struggle for the family.

Eventually Parmita realized the responsibility to provide for the family rested upon her shoulders, so she looked for work as a maidservant.

Despite their mother’s efforts, Natraj and Eila had no soap to use when they bathed and little food to eat. Sometimes Parmita managed to bring home leftover food from the homes she worked in, but other times her children only had water and gruel to fil their growling stomachs.

The children lived with need, fear and shame, while the rest of the village looked down on them in disgust and disapproval.

One thing concerned Parmita more than anything else: the education of her children. Little Eila didn’t like school, and Natraj, six years older than his sister, seemed unusually reserved. In 2006, Parmita learned about a local Gospel for Asia Bridge of Hope centre and enrolled both her children.

Embarrassment washed over the siblings as they entered the centre for the first time. What would the other students say about their fithy, wornout clothes? What would the teachers think? Eila worried they would beat her if she did not study well.

The children quickly realized they had no need to be frightened. After their arrival, Natraj and Eila received soap, toothpaste, clothes, notebooks, pens and other supplies from the centre, and they ate a balanced meal every day. Though she didn’t like to study before, Eila learned to enjoy her schoolwork through the staff members’ encouragement. They taught her memory songs to help her in mathematics, and Eila’s studies began to improve.

The children understood the love Jesus has for them through the staff members’ love and kindness. Life still held its difficulties, but the children began to smile again.

Dancing His Way to Graduation

When the staff members recognized the God-given talents the children possessed, they encouraged the siblings to pursue and develop those skills. Natraj became proficient in the art of classical dancing and won several awards as he grew older. His sister, now 14, followed in his footsteps and learned to dance as well. She hopes to be a doctor someday, and Natraj, following his graduation from Bridge of Hope, studied in a fashion design school. He continues to perform classical dances across the country.

Parmita and both her children now attend church together and are growing in their love of the Lord.

“The help my children got from the Bridge of Hope centre is unspeakable,” Parmita says. “The [love of Jesus] we received is priceless.”

Thank you for praying and giving toward Gospel for Asia ministries like Bridge of Hope. Through your support, God is touching the hearts of people across South Asia like Eila and Natraj.