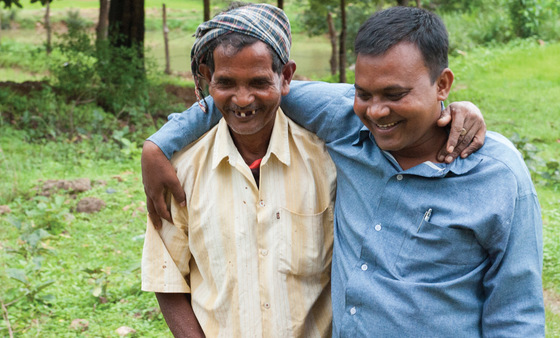 New Life for a Madman

Flooded with anguish and grief after his father’s death, little Baucha dropped out of school and withdrew from society. From then on, whenever someone even glanced at him while laughing, he took offense and responded by throwing stones and spitting at them.

People in the village supposed Baucha would become a madman as he grew up, and they were right.

As an adult, Baucha would turn violent in a moment. Quick to hold a grudge, his unsteady voice rarely uttered a respectful comment. Before Baucha’s mother died of old age, she tried every doctor and religious leader she could find to restore her son to his right mind. Sadly, nothing worked.

Eventually events took an unusual turn. The deranged man started spending his time in a local cave, neglecting his farmwork. One day, he declared himself to be a priest. The villagers thought him both absurd and very frightening; they even planned to call the authorities to take him away.

When a Gospel for Asia-supported pastor named Pranish met Baucha, Baucha reacted violently. But Pranish spoke with kindness and love, and Baucha calmed down in seconds, quietly listening to the pastor’s words.

Villagers warned Pranish not to talk to Baucha, but Pastor Pranish was filed with compassion for the troubled man. For weeks, he prayed for Baucha and showed him the love of Jesus through his actions and through the Word of God.

God Renews the Mind of a Madman

When Baucha entered a worship service two months later, even the believers were surprised to see him. Pastor Pranish welcomed Baucha to the church and prayed once again for his healing. God answered in a beautiful way.

God gave Baucha a new heart and mind that afternoon, and the other villagers stood amazed—some of them now believe Jesus is God. Today, this former madman is a kind, softspoken, hardworking husband and father of two, and he is growing in the grace of Jesus Christ.

Next: Unwanted Daughter Shares Her Story