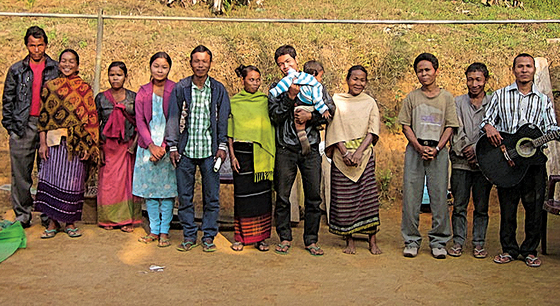 Shaurav walked into Pastor Jacob’s office and invited him to come minister in his village, Parinat Khera. For the Gospel for Asia district pastor, Shaurav’s request was an answer to prayer. But most people would have been terrified, not excited, to go to Parinat Khera.

A Notorious Village, a Close Call

This village had a reputation for being a hive of criminals. Many people there were wealthy—not because they farmed or did labour work, but because they robbed coal trucks or passenger vehicles that frequented the highway near their village. After looting vehicles—and sometimes shooting the drivers—the thieves would vanish into the jungle.

One time, some GFA-supported leaders narrowly missed an encounter with looters from Parinat Khera. These leaders had hired a jeep to travel home from the region, but they missed their ride and had to take another vehicle. While waiting for the second vehicle, they learned the first jeep had been robbed.

Gospel for Asia pastors prayed fervently for Parinat Khera. Although some villagers professed faith in Christ, there was no pastor in the village to guide them. Shaurav’s invitation to Pastor Jacob showed God’s clear response to the pastors’ prayers.

They count it a great privilege to lay their lives down for Christ, even if it's to reach the very people who persecute them. They are ready to suffer.

About a month later, when another Gospel for Asia pastor was leading an all-night prayer meeting in a believer’s home, police raided the village. They searched homes, looking for illegal materials. But the new Christians had nothing to fear because they had turned from their former lifestyle. Amazingly, the police left the believers’ families alone.

Now Pastor Jacob leads a worship service in the village each Sunday, and about 20 people attend. But the change in Parinat Khera isn’t just superficial. Since Pastor Jacob started sharing God’s love in this village, people from the region have told him there are fewer robberies in the area, and some drivers even say they feel safer now.

Because God sent Pastor Jacob to Parinat Khera to share the message of His love and grace, a village once notorious for crime is gradually gaining a new reputation as a place where lives are being transformed. Thank you for partnering with national missionaries to help reach villages like Parinat Khera with Christ’s love.

Previous: Why Her Daughter Won’t Get Married at Age 12