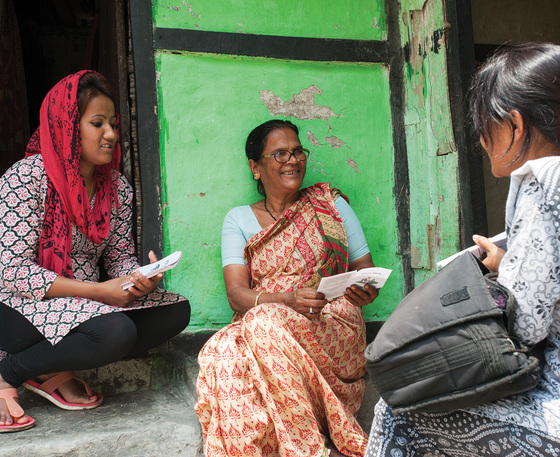 The Secret of Finding Joy

Ever since Reshika saw a film about Jesus in 2012, she wanted to know more about Him. Who was this man who bore so much pain for other people’s sins?

When two women handed her a booklet one day, excitement filled Reshika’s heart as she saw that the literature was about Jesus and that the two women, Gospel for Asia missionaries Aasha and Chandira, were Christians. Reshika seized the chance to find out more about Jesus.

“How can I know more about Jesus?” she asked. “How did Jesus come to this earth?”

Aasha and Chandira told her more about Christ and His mission to give new life to the world. Reshika listened attentively.

Seeing how interested Reshika was in learning about Jesus, Aasha and Chandira began visiting and chatting with her and answering her questions.

‘I Took a Step of Faith’

One day in 2013, the Gospel for Asia film team came to Reshika’s village again to show a movie about Christ, and Aasha and Chandira invited Reshika to come watch. Excited, Reshika brought her sister with her.

As Reshika watched the scene of Jesus suffering on the cross in agony, she began weeping, filled with remorse that He had endured pain and death for her. Reshika realized she needed His mercy.

The next day, when Aasha, Chandira and the film team paid her a visit, Reshika told them she wanted to live for Christ.

“I am delighted because the Lord has filled my life with His peace,” she later declared. There was no joy, no peace and no assurance of salvation before I knew Christ. I often wondered what I was living for, and I felt as if my life had no meaning at all. But as I took a step of faith, . . . my life was transformed. I am glad that the Lord is working on me. I have understood the secret of finding joy, which comes from knowing the Lord intimately.”

Now Reshika is growing in the Lord and is actively involved in the local church and Women’s Fellowship, and she tells many others the secret of finding joy. She found this joy because God sent two women missionaries to answer her questions and invite her to a film show. Through your support of national missionaries, the Lord is continuing to change the lives of men and women like Reshika throughout South Asia.

Next: A Terrifying Invitation From Their Persecutors