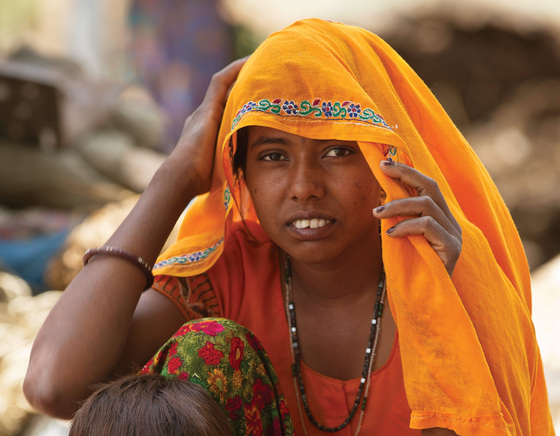 Sona walked up to the man passing by. She was desperate— but not for food. She wanted money to fuel her habit. Instead of giving her cash, the man pounded his fists into Sona’s body.

This wasn’t the first time Sona had endured such abuse. Her craving for drugs often left her at the mercy of strangers who saw her as a shameful woman.

Only a few years before, Sona had been an exemplary teenager, devoutly following her parents’ religion and always earning good grades in school.

Now, instead of making her parents proud, Sona filled them with sadness. No matter what they said or did, they couldn’t persuade Sona to stop taking drugs.

“We even kept her in a rehabilitation centre,” they recall, “but nothing changed her.”

As a young teenager, Sona had struggled with loneliness and began hanging out with girls in her neighbourhood—girls who were drug addicts. Gradually, Sona became one of them. When her parents learned about her problem, they tried talking to her, but their scolding only pushed her further away. She didn’t want to stay at home, so she spent many nights at friends’ homes or, worse, on the street.

Sona felt she couldn’t live without drugs. When she had no money to buy them, she began begging and stealing.

Eventually she realized her well‑meaning relatives and friends were right: She needed to stop taking drugs. But no matter how hard she tried, she couldn’t quit. The lure of drugs clung too strongly as she remained in the company of addicted friends.

One day Sona happened to run into Suday, a Christian friend. Longing to help the young woman who was tearing her life to pieces, he asked her to go to church with him. Sona was ready to do whatever might help overcome her addiction, so she started accompanying Suday to church every week.

One week the pastor, Gospel for Asia missionary Ekakshara, got to meet Sona. When she told him about her life, Pastor Ekakshara encouraged her from God’s Word, telling her that even if everyone in the world hated her, Jesus loved her and had died for her.

“Sona, you have come to the right place,” he said. “Jesus is a life-giver, and He loves you so much. He is ready to give you a new life.”

Sona’s heart brimmed with hope as Pastor Ekakshara shared the words of 2 Corinthians 5:17: “Therefore, if anyone is in Christ, he is a new creation; old things have passed away; behold, all things have become new.”

“I thought, No one loves me, and I am rejected and alone in this world,” Sona told Pastor Ekakshara. “But today I came to know that Someone is there to love me and care for me.”

At that moment, Sona welcomed Jesus into her life.

The Road to Freedom

Pastor Ekakshara prayed for her and, with his wife, began visiting her regularly. They counselled Sona and encouraged her with God’s Word.

“You are so precious and unique to God,” Pastor Ekakshara said, telling her God wanted to use her life for His glory.

Meanwhile, the whole congregation fasted and prayed for Sona’s deliverance from drug addiction. Through persistent prayers and counselling, Sona overcame her addiction, and God filled her life with peace.

Overjoyed by Sona’s transformation, her parents thanked Pastor Ekakshara for his love and care. They even got to watch Sona get married—something that could have been jeopardized in a society where drug addiction leaves a stigma.

Because of the compassion, faithful prayers and counselling of a national missionary and his wife, Sona is now a new creation in Christ and is married to a fellow believer, Suday.

God is using your generosity to touch thousands more people like Sona as you partner with national missionaries in Asia. Thank you for sharing Christ’s hope with those who were once desperate.