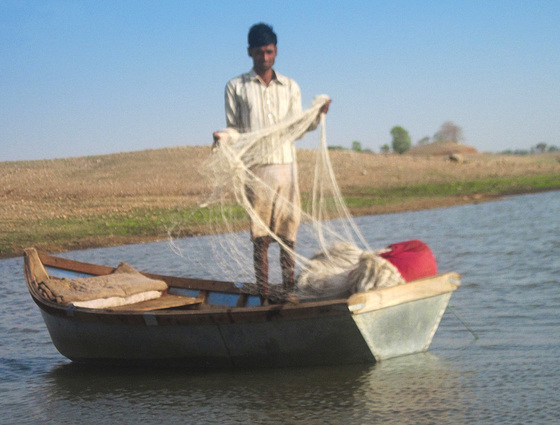 Out of the Pit and Onto the Waters

Owning a boat was an impossible dream for 30-year-old Kuldip. Even if he worked for a lifetime, he knew he could never afford one—he couldn’t even send his oldest daughter to school. He was happy just to rent a boat for a day, assuming he couldn’t find work elsewhere.

Kuldip, his wife and their three young children lived with his parents in a small fishing town. His family was not wealthy.

Since childhood, Kuldip had suffered from a debilitating urinary tract infection, needing frequent medical help to urinate. His parents had spent all their resources at doctors and temples, but nothing changed until Kuldip was 22. That’s when he met Gospel for Asia pastor Haatim.

Standing on the Rock

Pastor Haatim told Kuldip nothing was too difficult for the Lord Jesus and offered to pray for him. Within a few weeks, God completely healed the young man. From that day on, Kuldip and his parents trusted in Jesus alone. He married Sansha one year later and soon became a father—something doctors had told him wouldn’t happen

Kuldip’s skill as a fisherman helped provide for his growing family. He hired himself out to work with boat owners and typically made enough money to get by. But that all changed the day he fell off a boat and broke his leg, becoming bedridden for six weeks. Once again, Kuldip’s medical expenses strained the family’s meagre income.

Despite these challenges, Kuldip and his family trusted in Jesus, remembering nothing was too difficult for Him. They constantly prayed to the Lord, asking Him to bless and sustain them.

To their great joy, God provided Kuldip with a boat through Gospel for Asia.

New Life on the Waters

Now, instead of giving a portion of his catch to pay a boat owner, Kuldip can keep his earnings to provide for his family’s needs.

With the extra income provided through his new boat, Kuldip was able to enroll his oldest daughter in the first grade. He also plans to build a house of his own so he and his wife can move out of his parents’ home.

Thanks to the generous donations of GFA friends like you, Kuldip’s family can sail on smooth waters. Out of his gratitude, Kuldip gave an offering to the Lord from the first earnings of his new boat. He expressed his heartfelt appreciation and thanks to everyone who helped provide this gift for him, lifting his family from the pit of poverty.

Previous: Boy Gets Caught in the Act, Gains Freedom