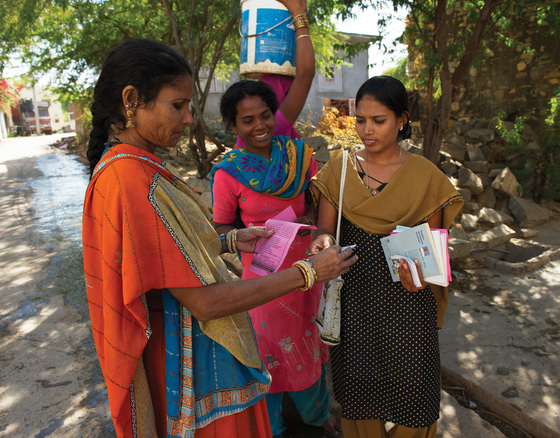 Smita immediately recognized the booklet two women handed her. Did these ladies have answers to her questions?

Smita had been searching for someone to tell her about the God who had changed her life, but she didn’t know where to look.

Within a three-year span, Smita had needed three operations: a hysterectomy, kidney stone surgery and an appendectomy. These surgeries had left her in a state of constant pain, to the extent that she couldn’t care for her husband and two young sons. Every part of her body ached, and although she spent money buying medicine and offering sacrifices to her gods, her health didn’t improve—until the day a neighbour suggested she visit a nearby pastor. When Smita and her husband visited the pastor, he prayed for her.

Within a month, God healed Smita. But when she and her husband went to share this good news with the pastor, they couldn’t find him. The only thing they had that could tell them more about the Great Physician was some Christian literature the pastor had given them, including a booklet called “The Way to God.”

A Key to Answers

Staring at the booklet in her hands—the same one she had received from the pastor—she knew these women might be the key to finding out more about the God who’d healed her. Smita began opening up to them.

“I have a tract of the same kind at my home, and I have read that many times,” she said. “It was a great encouragement for me.”

Smita shared her story with the women, Raveena and Lekisha, unaware that Raveena had a similar story of desperation, hope and waiting.

Raveena had also known the agonizing pain of an illness—and the crisis it could create in a family. At age 17, after giving birth to her daughter, Raveena was diagnosed with a chronic heart condition. Her family spent hours taking her to hospitals and large amounts of money on treatments. Meanwhile, Raveena’s husband left her for another woman, and she fell into a pit of despair.

Like Smita, the woman missionary had also found hope through the healing hands of God. One day, Raveena happened to hear a radio broadcast that shared how Jesus could heal any kind of disease. Her heart swelled with hope, and she joined with the radio broadcaster as he prayed for the sick, believing for her own healing. Then a burning sensation filled her entire body as God healed her—a fact later proven when she could get out of bed and work around the house.

But like Smita, Raveena didn’t have any way of knowing more about the Healer, Jesus.

It wasn’t until years later that Raveena met a GFA pastor and some believers who reached out to her and told her more about the God who had healed her body and would soon heal her soul.

After growing closer to Christ, she decided to spend three years at a GFA Bible college learning how to reach other women, like Smita, with the same love that had changed her life.

As Raveena neared the completion of her studies, she shared, “After graduation, I want to go and share my testimony with so many people. There are so many people just like me! They are in a broken condition. I just want to . . . encourage them through my testimony.”

So when Raveena and Smita met in the marketplace, God fulfilled both of their desires. Smita found someone who could tell her about Jesus, and Raveena got to encourage a woman in the same place she’d once been—a place of desperation for a deeper relationship with the One who had healed her.

Overjoyed to meet the women missionaries, Smita asked Raveena and Lekisha to come to her home. There, they spent time telling Smita more about Jesus and praying for her family.

Because Smita’s interest in the Lord continued to grow, Raveena and Lekisha regularly visited her, praying that she would come to know Jesus.

Now Smita, her husband and her children are following Him. They are growing closer to Christ as they join worship services with the local GFA congregation and as Raveena and Lekisha continue to encourage them in their spiritual journey.

Because God brought these two missionaries to answer Smita’s questions at the right time, an entire family is now worshipping Jesus. Thank you for partnering with women missionaries like Raveena and Lekisha. God is using you to help our sisters in Christ to fulfill their calling, sharing His love with their fellow women in a time of need.

To learn more about Raveena’s story, you can read the story “Prepared to Be a Powerful Witness” from the March 2013 issue of SEND! magazine (now known as GFA World) at gfa.ca/raveena.

Next: Boy Gets Caught in the Act, Gains Freedom