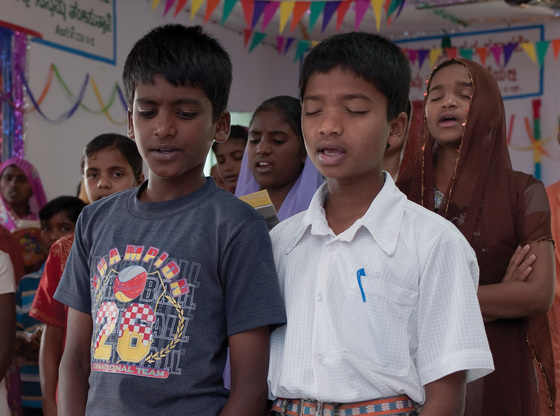 Deepak, 10, and Charu, 14, who live only a few miles away from each other, have suffered the same tragedy—but, more important, have found the same hope.

More Than a Roof Over His Head

Deepak’s grandparents worshipped their gods zealously, regularly performing rituals and sacrifices. So it wasn’t strange that their daughter, like thousands of other women from poverty-stricken yet religious families, became a temple prostitute.

After she gave birth to Deepak, she found out a client had given her something that would eventually destroy her: HIV. Her parents took her to hospitals where she received expensive treatment, but she passed away when Deepak was only 4 months old.

Deepak’s grandparents took responsibility of caring for him, even though they struggled to make ends meet. Then they discovered Deepak had HIV too.

Through all their hard work, Deepak’s grandparents were able to send him to public school, but Deepak wasn’t interested in learning. To him, a boy with a death sentence, school was just a roof over his head.

One day the staff of the local Gospel for Asia Bridge of Hope centre met Deepak’s family. They saw the plight of two grandparents trying to care for their HIV-positive boy who seemingly had no hope. Wanting to encourage the family, the staff told them God loved them and shared about the work of Bridge of Hope. Deepak’s grandparents asked if he could join, and the staff happily enrolled him in the program.

At Bridge of Hope, surrounded by caring, loving staff and classmates, Deepak’s life began to change. He wanted to go to the centre as often as he could, and he became interested in school.

In a village only a few miles away lived another orphan, Charu. His father had died before he was born, and his mother died three years later. Like Deepak, Charu was raised by grandparents who could barely provide for themselves.At 60 and 75, Charu’s grandparents, Kandan and Makshi, could find work only as daily labourers, and they struggled just to feed Charu. Eventually, Kandan grew too old to work, so Makshi toiled as the sole breadwinner.

Makshi approached the local Bridge of Hope centre to see if they had any work for her, and they hired her as a cook’s helper. Over time, she opened up to the project coordinator, Raza, about her struggles to provide for Charu’s education. Eager to help, Raza invited Charu to join Bridge of Hope.

Knowing Charu would get a quality education filled Kandan and Makshi with gratitude, but they were still concerned about him. He often got a severe fever, and even though they took him to the hospital, his condition didn’t improve. When the Bridge of Hope staff learned about this, they prayed fervently for Charu.

The Lord restored his health, but a few days later, Charu got sick again, and the doctor gave a crushing diagnosis: Charu had HIV.

Despite this devastating news, Makshi hoped that the God who’d answered the staff’s prayers would continue to intervene. She asked Raza about Jesus and visited a local fellowship. Hearing God’s Word filled her with comfort, and she and Kandan both decided to follow Christ. Meanwhile, the Bridge of Hope staff continued to pray for Charu. As God responded to their prayers, his health started to improve.

Despite the illness that can destroy them physically and emotionally, both Deepak and Charu are thriving at Bridge of Hope as their families and the staff members pray for their complete recovery. Now these young men are trusting God for the future, and they have the chance to positively impact society.

Deepak, who was once apathetic about school, is excelling in his studies, earning good grades in every subject. He hopes to one day become an engineer. Even better, he is growing up in a home with grandparents who love him and love Christ. After experiencing God’s love through the Bridge of Hope staff, they decided to follow Him and now attend a local congregation.

Meanwhile, with Charu’s health gradually improving—thanks in part to the prayers of the Bridge of Hope staff—he can participate actively in Bridge of Hope. His grandparents hope that one day he will go into full-time ministry. Filled with faith in the God who saved her grandson’s life, Charu’s grandmother regularly tells others about Jesus and often sees Him heal sick people when she prays for them.

Through Bridge of Hope, these two adolescent boys have gained more than an education; they have gained access to a bright future, and they have watched Christ’s love transform their families.

“We have been changed into new persons, and Jesus’ love has brought us joy, peace and happiness,” say Deepak’s grandparents. “We don’t have to do anything to earn His love. … We also thank Bridge of Hope for helping our grandson.”

Thank you for supporting the ministry of Bridge of Hope. God is using your prayers and generosity to bring His joy and peace to more families!