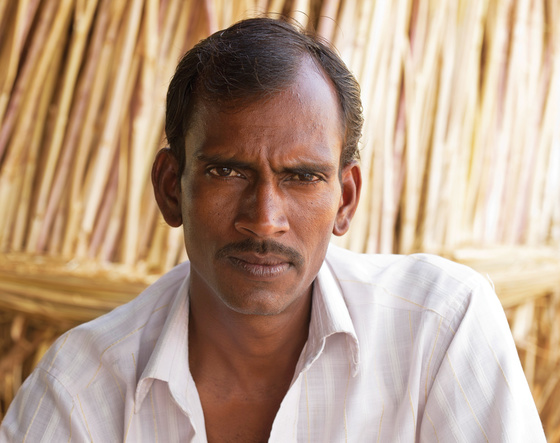 Manindra had lost all hope—hope his father would ever get better, hope he could find a wife and hope his family could ever have joy or peace again.

Even though his family members faithfully followed their religion and all the customs and rituals that went along with it, nothing changed and they had no peace. Because of this, Manindra was no longer interested in following their religion.

Years ago, Manindra’s father’s asthma became so bad he couldn’t work. He went to a number of hospitals for medication, but nothing helped.

Although Manindra’s parents had planned to put all three of their children through school, his father’s sickness meant Manindra had to work instead of study. Because he was the oldest child, the responsibility to provide for the family fell solely on him.

Manindra didn’t make very much money as a daily labourer, but he earned whatever he could to provide for his family’s needs. His hard work meant his siblings could stay in school.

Eventually, Manindra felt he was ready for marriage. He began looking for a wife, but time after time, the woman or her parents would throw his marriage proposal back in his face. Unable to handle this rejection, Manindra became depressed.

It was at this time in his life that Manindra met Turvasu and Badri, members of a Gospel for Asia mobile team. Upon hearing of all Manindra’s struggles, the missionaries encouraged and prayed for him. Their sincere prayers touched Manindra, and he invited them to his house. There, Turvasu and Badri were able to tell him and his family about Christ’s power to transform lives.

Later that day, the missionaries showed a film about Jesus for the entire village, and Manindra and his family came. The Holy Spirit spoke to their hearts throughout the movie.

When the film ended, Manindra went to talk and pray with the missionaries. He confessed his sins and chose to put his trust in Jesus Christ.

From there, God’s love transformed Manindra’s life. He began going to the local Gospel for Asia church. As his new faith grew, his devotion brought opposition from some of the villagers, who would ask, “Why are you going to church? Jesus is not our God. He is a foreign God.”

Unfazed by their disapproval, Manindra stood strong. Now Manindra’s entire family believes in Jesus, and his father’s health is improving.

Turvasu and Badri ministered to Manindra at just the right time, and they were able to reach him because generous friends like you donated to equip mobile&nbspteams. Thank you!