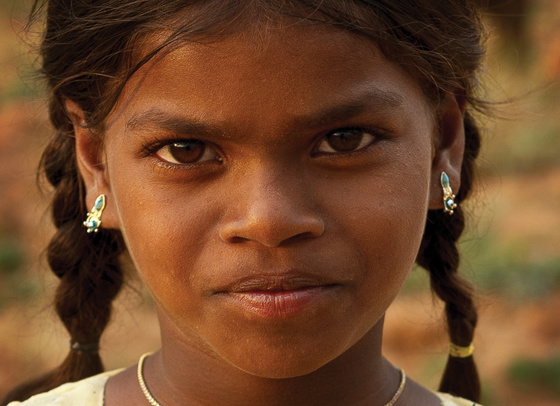 Kishori married when she was only 7 years old, not knowing her in-laws had a life-altering secret.

When Kishori began living with her new family, she found out her mother-in-law and father-in-law had leprosy—a disease physically devastating to those without access to treatment, as well as socially stigmatizing.

Instead of despising her in-laws, as the rest of her society would, Kishori took care of them, shouldering most of the household chores.

At 15, she gave birth to her first child; it was her second pregnancy, however, that impacted her life in an even more marked way.

During the pregnancy, Kishori’s legs started to swell, and boils appeared. At the hospital, doctors confirmed her suspicion: She had leprosy.

Because Kishori was pregnant, she couldn’t begin treatment. After her son’s birth, she started taking medication, but in the following years, three more pregnancies disrupted her treatment, and the disease spread.

After her last child was born, Kishori resumed her medicine regimen, but leprosy had already taken its toll on her hands, legs—and soul. Afraid others would hate her because of the disease, Kishori stopped going to the market, attending social functions and spending time with friends. People even asked her husband why he didn’t kick her out of the house, but he insisted he loved her and refused to abandon her.

Leprosy made Kishori’s life painful and more difficult. She spent all day begging in order to feed her family. She couldn’t afford to hire a rickshaw, so when she needed to go to the hospital for treatment, she walked more than three hours on marred feet.

Finally, those long journeys stopped one day—the day Gospel for Asia missionaries came to Kishori’s home. They asked if they could clean her wounds. Shocked, Kishori couldn’t fathom why someone would freely offer a service most people wouldn’t do even for money. While cleaning Kishori’s wounds, the missionaries prayed for her and told her of the Healer.

Every week, Kishori excitedly welcomed the missionaries into her home, and her family heard them share about Christ’s love. Even more people got to share in the blessing as Kishori invited neighbours with leprosy to come have their wounds cleaned and hear the Good News.

Through the missionaries’ sacrificial lifestyle, Kishori realized God actually loved her and could heal her. As her wounds gradually began to heal, Kishori put her faith in Christ, and soon her husband and two of her children followed.

Now Kishori knows God not only as Healer but also as Provider. In 2012, Gospel for Asia opened a medical clinic near Kishori’s village. In addition to medical care, Kishori and many others in her leprosy colony get a nutritious meal each day. They also receive items like mosquito nets, shawls and special shoes for leprosy patients.

“God is providing so many things. ... I feel that God is my only father and mother,” Kishori says.

She knows that without His grace, she may have lost her fingers and legs. Instead, she has now almost completely recovered from leprosy, and she and her family worship Christ along with many others in the leprosy colony.