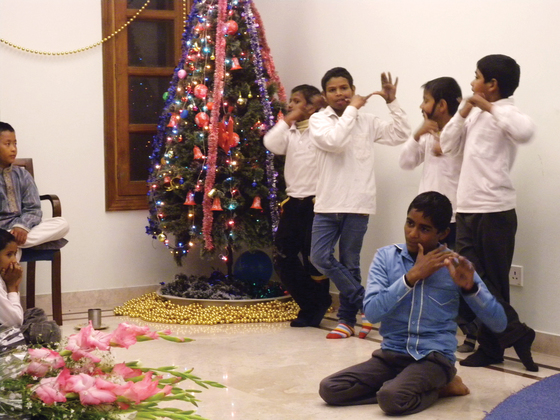 Being Left to Die Saved His Life

Nandi doesn’t remember why he left home as a young boy, but he can’t forget how much his life has changed since then.

Several years ago, Nandi got on a train and ended up on the streets. Handicapped by polio, Nandi was a prime target for people who take advantage of street children. A man coerced Nandi to beg for him and, after a few years, took him to another city. Along with many other children, Nandi spent his days begging at traffic signals, and at the end of each day, the man would take almost all of their money.

One night, however, everything changed. Nandi was begging as usual when a vehicle ran over him. Seeing Nandi bleeding on the street, the man left him to die. But a compassionate woman brought Nandi to a hospital for treatment. After a few months, Nandi’s wounds healed, and the government sent him to a home for abandoned and runaway boys run by GFA staff.

There, Nandi receives shelter, nutrition, education and care. The staff arranged for Nandi to go to a good school, and he is now excelling in second grade, with hopes of becoming a social worker in the future. He also loves participating in cultural dances, skits and sports with the other boys at the home. Through the compassionate staff, Nandi is experiencing Christ’s love—a love that starkly contrasts the abuse and neglect he once knew. He has decided to embrace Jesus’ love, and he wants to remain a faithful member of the Body of Christ throughout his life.

“I am very much grateful to [the] children’s home, which has been taking care of me and providing me education, clothes, food and my daily needs,” Nandi says. “When I remember my past life, when there was nobody to take care of me, I had to beg. But now, the . . . teachers and [staff] take care of me, and that reminds me to be faithful to Jesus and follow Christ forever.”

Through an accident that could have left Nandi dead, God brought him off the streets to a place of safety and hope, and now Nandi worships Him joyfully. With your support, Gospel for Asia is able to provide a loving home for more children like Nandi.

Next: Hole in Girl’s Heart No Match for Dedicated Staff