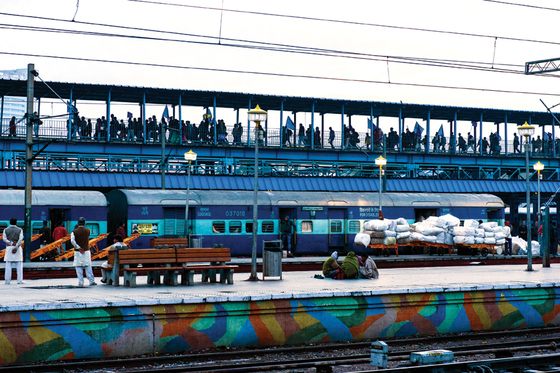 As the train pulled to a stop, Arvinda made his decision: He was getting off.

Deciding to Get Off

All his life, Arvinda had devoutly followed all the teachings and observed all the rituals of his religion but problems in his family left him without hope or joy. Then he lost his job and remained unemployed for more than a year.

Arvinda traveled by train each day. And every day, he found that peace filled his troubled heart when he looked out the window at one particular building along the railway.

Arvinda began making sure to look at this building whenever he traveled by it so he could experience the sense of calm that nothing else ever gave him.

One Friday, as he looked out the window, he saw a sign on the building and was able to read its name.

Curiosity consumed him, and he made his way off the train.

Arvinda entered the building — a church building — and sat in the back as a prayer meeting took place. Comfort welled up in his heart as he listened to the pastor, Gospel for Asia missionary Jujhar, share from the Bible. Afterward, Pastor Jujhar invited him to come to the Sunday worship service.

Arvinda visited the church again two days later, this time feeling deeply discouraged. But once again, he felt calm inside the church. This Sunday, a visiting church leader, Pastor Bibhas, shared a message about Christmas, citing John 1:10–12: “He was in the world, and the world was made through Him, and the world did not know Him. He came to His own, and His own did not receive Him. But as many as received Him, to them He gave the right to become children of God, to those who believe in His name.”

Excited to speak with the visitor, Pastor Bibhas talked with Arvinda after the message. He encouraged Arvinda, sharing stories of Jesus’ miracles and his own personal experiences of what God had done. Arvinda, in turn, told Pastor Bibhas how he had often felt peace as he looked at the church building from the train, and he was overjoyed to have learned about the Living God because of it. Hearing Arvinda’s testimony, Pastor Bibhas praised God for providing a church building and using it to lead Arvinda to the Good News.

Arvinda has decided to follow God all the days of his life, and he, his wife and three children attend church regularly and participate in all church activities. Additionally, Pastor Bibhas and the believers prayed faithfully for Arvinda’s work situation, and this new believer now has a job at a hospital. All this happened because the Lord used the generosity of believers around the world to provide a congregation with a permanent house of worship.

Next: From Rags to Restoration: Women’s Health Project