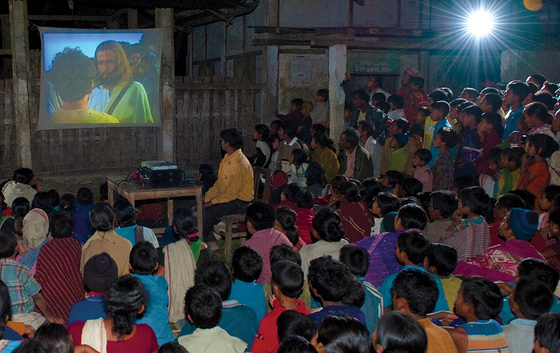 Malay and Hamid trekked up another hill. They had already travelled through many villages to show the film about Christ and what He had done on the cross.

When the two missionaries arrived at their next stop, they met the local Gospel for Asia pastor, Zahir, who helped them prepare for the film show.

Once the film began, around 200 villagers showed up to watch it. When the movie ended, Pastor Zahir explained the film’s message. He shared how the Lord Jesus had gone through all that pain to give us a way to heaven.

As the crowd began to disperse and Malay and Hamid packed up the equipment, a young man made his way toward them. When he got closer, they noticed that tears were streaming down his face.

“Why are you crying?” the missionaries asked with concern. They listened as the young man’s story poured out.


Baladhi, 22, lived with his parents and five siblings on their farm. As he watched the film, he was cut to the heart by Jesus’ sacrifice.

Baladhi told them he had never known of a God who had suffered and died for the sins of others.

“Now I know that Jesus suffered for my sin and the sins of the whole world. I understand that Jesus is the real God,” Baladhi explained through his tears.

That very night, Baladhi made the decision to follow Christ as his Lord.

Malay and Hamid rejoiced with the young man who had come to know the saving love of Jesus. After packing up their equipment, they continued on their trek—excited to see what miracles the Lord would work in the next village.

Next: Saved from the Fate of Her 14 Siblings